With the opening of a 14,000 sqm warehouse in the Czech Republic specialized in handling batteries for electric cars, A.P. Moller - Maersk (Maersk) is expanding its offering as a preferred logistics partner for the Central European automotive industry and original equipment manufacturers (OEMs). 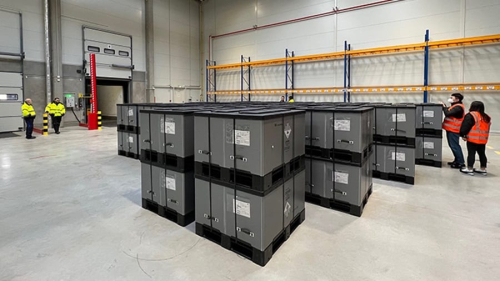 The batteries can be efficiently delivered by train from the ports of Hamburg, Bremerhaven, Rotterdam, Koper or Rijeka. Due to the warehouse’s good connection to the Czech and German motorway networks, the batteries can be reliably distributed from Teplice to the surrounding car production sites within a few hours.

The warehouse has a full range of safety features to guarantee best handling of the electric car batteries. Besides thermal monitoring cameras and in-rack sprinklers throughout the warehouse, the space will be divided into four independent, fire-resistant compartments.

In addition to repacking, the services offered in the special warehouse include in-depth quality controls and charging of the batteries as well as other value-adding services along automotive supply chains.

Maersk is also building a new deep-water terminal in Rijeka, Croatia, which is scheduled to be inaugurated in 2025. It will increase handling capacity in the Eastern Adriatic and significantly reduce the transit times and thus also CO2 emissions of transports from Asia to Europe and especially to Croatia, the Czech Republic and neighboring countries.