Audi is strengthening its development capabilities in China with a significant broadening of its R&D scope in the region and an expansion of its local Audi China R&D team. The move to the new Audi China Building, opening nearly 10 years after its predecessor, is also a significant milestone in Audi’s more than three-decade long history in China. 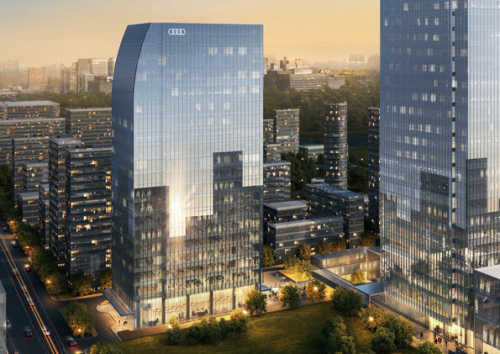 The new Audi China Building supports Audi’s efforts to establish additional research and production capacities in the country. The R&D facility will serve as a key innovation hub for the next generation of Audi technologies.

Both the new R&D center in Beijing and the Audi FAW NEV Company in Changchun clearly prove the progress in transforming Audi’s business in China. With both projects, we are addressing the market-defining trends in the Chinese auto market, namely: electrification, digitalization, and sustainability.

The new Audi China Building is the foremost development hub for Audi in China and home to seven different R&D departments with end-to-end vehicle development capabilities.

Located in the heart of Beijing’s North Central Business District, the Audi China Building spans more than 6,000 sqm across five floors and accommodates all departments of the Audi China R&D division. In a dedicated area, Audi Design China uses advanced digital tools such as VR headsets and digital drawing tablets to create the car designs of the future. The building also includes two workshops and a robust design lab, as well as an electronics lab and an engaging public showroom.

Audi has a history of developing specific products and technologies for the Chinese market. Along with the founding of Audi China in 2009, the local R&D division was formally established as a fully integrated satellite of AUDI AG’s technical development division in Ingolstadt, Germany. Since 2013, the development team has been based at the former “Audi China Building” in the 798 Art District of Beijing. Over the years, responsibilities covered by Audi China’s R&D division have grown steadily.

With the new R&D center in Beijing, Audi is further building upon its world-wide development network, which also includes sites in Germany, Hungary, and Mexico, as well as design studios in the USA and China.