JERA is a 50-50 joint venture between TEPCO Fuel & Power, a wholly owned subsidiary of Tokyo Electric Power Company (TEPCO), and Chubu Electric Power. The company owns and operates all of TEPCO and Chubu Electric thermal power stations, giving it a total output of approximately 67 million kW (including capacity under construction)—making it Japan’s largest power generation company.

Under its “JERA Zero CO2 Emissions 2050” objective, JERA has been working to reduce CO2 emissions from its domestic and overseas businesses to zero by 2050, to promote the adoption of greener fuels, and to pursue thermal power that does not emit CO2 during power generation.

Larger transport vessels are needed to enable low-cost procurement of ammonia in the large volumes required fuel for power generation. 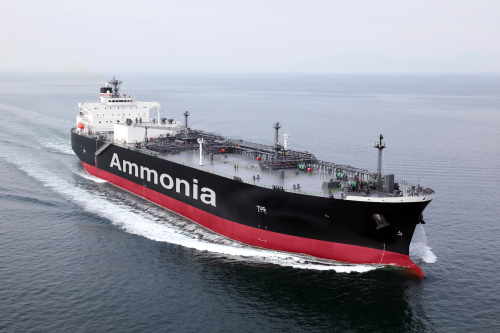 In preparing to start commercial operation of large-volume co-firing of fuel ammonia (20% of heating value) at Hekinan Thermal Power Station Unit 4 in the latter half of the 2020s, JERA has, since February of this year, been conducting an international competitive bidding process for fuel ammonia procurement, including an opportunity to participate in a fuel ammonia production project.

In addition, the establishment of a method for transporting ammonia as a fuel for power generation will create a supply chain for the Hekinan Thermal Power Plant that reaches from upstream fuel ammonia to power generation.

If the development of large-volume ammonia carriers and the construction of a fuel ammonia supply chain are achieved, both would be world firsts.

NH3 is a toxic gas and liquid that has a relatively low exposure limit for humans; it will be interesting to see what safeguards are created to use it safely.