At its Dakar debut in January 2022, the Audi RS Q e-tron (earlier post) series hybrid set standards in efficiency and competitiveness of e-mobility in motorsport. In the next step, the three desert prototypes with electric drive and energy converter will run in the 2023 Dakar Rally with an innovative fuel—a blend of ethanol-to-gasoline (ETG) and e-methanol. 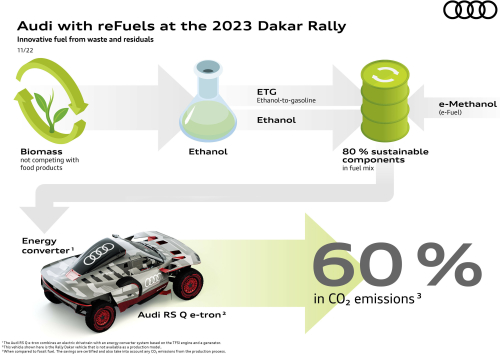 The final fuel blend fuel consists of 80% sustainable components, including ETG and e-methanol. This fuel is required by the energy converter, the combustion engine component of which operates with high compression and thus very efficiently to supply electricity for the electric drive.

The drive concept in principle already requires less fuel than conventional systems—but now there is now a further optimization with the fuel mixture.

This development, driven by Audi, complies with the strict chemical specifications of the FIA and ASO fuel regulations. They are similar to the regulations for commercially available fuel grades with 102 octane. Such a high value guarantees the anti-knock properties of the fuel-air mix during the combustion process.

With this innovative fuel, the combustion engine even achieves slightly higher efficiency than with fossil-based gasoline. However, the oxygen content in the reFuel reduces the energy density of the fuel, which is why the volumetric calorific value drops. The RS Q e-tron therefore requires a larger tank volume. This does not give the vehicle a regulatory advantage, because fuel flow meters determine energy consumption with maximum precision in the interest of equal opportunities among the participants.

Audi’s vision is to drive the world’s most demanding races with 100% renewable fuel. The use of what Audi calls reFuels opens up an additional dimension to the technology transfer between motorsport and production cars—vehicles with combustion engines and hybrid drives can continue to make an effective contribution to reducing greenhouse gases with reFuels.