Fusion Fuel has entered the centralized electrolyzer market with the introduction of its HEVO-Chain solution.

Rather than relying on a traditional cell-stack, the HEVO-Chain builds off Fusion Fuel’s proprietary HEVO architecture (earlier post), enabling the system to operate at higher efficiency—roughly 49 kWh / kg of hydrogen—and avoid the losses that stem from more conventional electrolyzer stack designs. 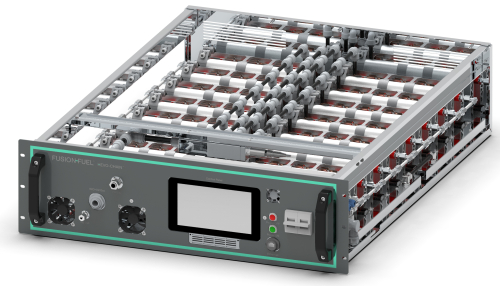 Each HEVO-Chain hydrogen unit consists of 16 HEVO micro-electrolyzers interconnected along a string, representing 11.2 kW of electrolysis capacity and outputting 5.6 kg of hydrogen per day at a pressure of 4 bar.

A planned second-generation unit is expected to increase the pressure at the outlet to 20-30 bar, among additional improvements. As with the HEVO-Solar, the HEVO-Chain was built with modularity and scalability in mind—it is designed for a standard 19" rack cabinet, allowing for up to eight units to be integrated seamlessly alongside the power electronics and water purification system.

The HEVO-Chain is currently undergoing comprehensive performance and reliability testing. The company expects the first HEVO-Chain units to enter commercial use in 2024.

We are extremely excited to introduce the HEVO-Chain, an innovation which represents the culmination of more than two years of hard work by our R&D and Engineering teams. Building on the radically different concept of allowing each membrane to operate independently and having multiple electrochemical cells in simultaneous operation, the system is engineered to operate with lower power requirements and cheaper power systems than existing solutions.