Coca-Cola Europacific Partners (CCEP) will start using 30 electric trucks to make “last mile” deliveries to local customers in Belgium. The first five vehicles will go out today in the Antwerp area. Through a key partnership with Renault Trucks, the beverage manufacturer is electrifying one-fifth of its truck fleet and creating the largest fleet of electric trucks in Belgium. The company will also reduce its CO2 emissions by 75% compared to diesel trucks. 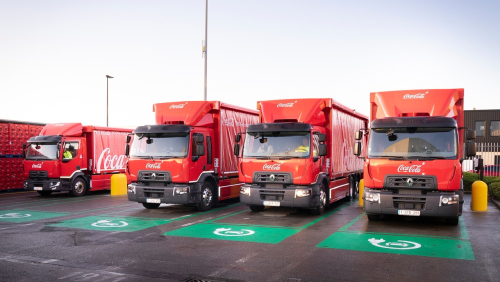 The first five Renault Trucks E-tech D and D Wide are out in the Antwerp area now, and other trucks will arrive in the coming months at the manufacturing and distribution sites in Ghent and Chaudfontaine in Belgium.

Coca-Cola chose a configuration allowing Renault Truck’s electric vehicles to cover 200 km daily, which is more than enough for 40% of CCEP’s current local delivery routes. Each truck has an on-site charging station to recharge the battery fully overnight. These charging stations are powered by 100% green energy generated at the site.

Coca-Cola worked closely with Renault Trucks to select the right trucks and create the best loading conditions for this local use.

We carefully analyzed Coca-Cola’s logistics data, produced realistic route simulations, and carried out tests under real conditions that looked at energy consumption as well as driver comfort and safety. The trucks are also equipped with 360° camera systems to eliminate blind spots, a loudspeaker to warn pedestrians and cyclists, and a clear door for optimal visibility on the passenger side.

The 30 electric trucks being rolled out this year are just a first step for CCEP.

We will keep taking steps to decarbonize our fleet until 2030 while continuing to study market developments to determine the future of our fleets by considering parameters such as covering longer distances, vehicle autonomy, and heavier loads.

—An Vermeulen, VP & Country Director of Coca-Cola Europacific Partners for Belgium and Luxembourg

Renault Trucks is part of the Volvo Group.