A Siemens Energy-led consortium has begun work in Newcastle, UK on a new £3.5 million (US$4.24 million) ammonia cracker prototype designed to produce green hydrogen at industrial scale. The prototype will use ammonia to deliver 200kg of hydrogen a day—enough to power around 5-10 hydrogen fuel cell-electric buses.

The ammonia cracker system will provide the potential to produce green hydrogen at scale, wherever and whenever it is needed. The system will be designed to deliver high-purity hydrogen, suitable for PEM fuel cell use, using FFI’s Metal Membrane Technology (MMT) purification process.

The MMT process developed by FFI and Australia’s national science agency, the Commonwealth Scientific and Industrial Research Organization (CSIRO) (earlier post, earlier post) is key to producing high-purity hydrogen from the ammonia cracking process. It selectively filters the hydrogen while blocking other gases, allowing it to be used as a fuel and converted as needed, at the time of re-fueling. 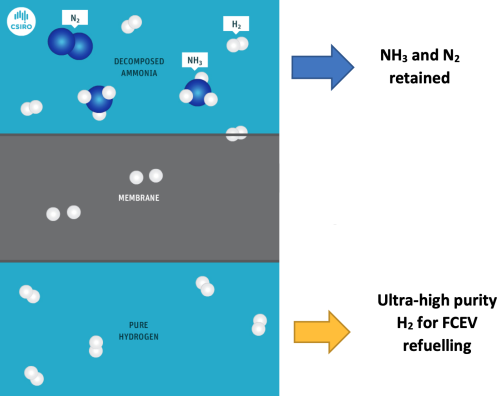 Schematic of CSIRO’s metal membrane technology which selectively allows H2 to pass through, while blocking all other gases such as NH3 and N2. Source: CSIRO

We have just 13 years to deliver a net-zero electricity grid for the UK. Time is running out and we can’t do this alone. This innovative green ammonia cracker could be a game-changer for scaling up the green hydrogen industry – an important step to drive the energy transition.

Ammonia has a high hydrogen density and is readily transportable in bulk. It can be used for storing large amounts of hydrogen in a liquid form that builds on existing global supply chain infrastructure. The traditional process of producing ammonia has used “grey” or “black” hydrogen from either natural gas or coal. The Haber-Bosch process used to produce “green” ammonia from green hydrogen, using renewable power, does not result in CO2 emissions during the process.

The cracker and MMT, if successful, will allow the green hydrogen to be recovered and delivered as high-purity hydrogen at the point of use, with a focus on mobility and off-grid power applications. The technology could then be scaled up for future markets, including industry, heat, and grid-scale power generation.

Siemens Energy has proven experience of innovation with ammonia. The team previously led a collaborative project at the Rutherford Appleton Laboratory (RAL) in Oxfordshire. The £1.5-million (US$1.8-million) proof-of-concept facility showcased an ammonia-based energy storage system that turned electricity, water and air into ammonia without releasing carbon emissions. The ammonia is stored, before being used for electricity generation. Ammonia cracking was not included at the pioneering RAL demonstrator so the ammonia cracker prototype fills a supply chain gap in the technology.

The UK Government estimates that hydrogen could make up to one third of the UK’s energy mix by 2050 but there are challenges with hydrogen storage and transport that need to be addressed to make this viable. The ammonia cracker prototype aims to help tackle these challenges.

Siemens Energy and FFI are providing engineering expertise and innovative technical solutions. GeoPura will provide onsite management, and as the off-taker will be taking the hydrogen product from the prototype ammonia cracker system for use in their fuel cell power generation technology. 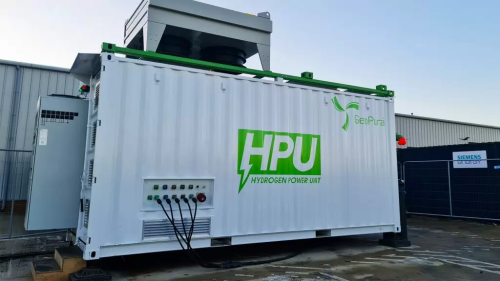 GeoPura plans to use this hydrogen to supply Hydrogen Power Units (HPUs). HPUs are used as a replacement for heavy polluting diesel generators as an off-grid solution to provide zero emission power to a wide range of industries including TV production, such as Netflix and BBC’s Winterwatch and construction projects, including HS2.

Using Ammonia to store and transport Hydrogen solves many problems associated with using hydrogen. It does however, require a process to sequester the hydrogen at the beginning of the cycle and an additional process to release the hydrogen for use, unless of course, the ammonia can be used directly.
The amount of pollution produced depends on how the ammonia is produced...creating ammonia using fossil fuel feedstock is a mess of high temperatures and greenhouse gas pollution, just as you would expect because the hydrogen must first be separated via the highly polluting steam reforming process.. using H2 from electrolysis is cleaner.
We just can't seem to get away from polluting the Planet everytime we try using fossil fuels...Oh Well! maybe NH3 is not an answer to the clean energy usage questions.