Home About Contact RSS GCC Twitter Newsletter
VinFast exports its first batch of EVs: 999 VF8s to US
US Treasury allows Chevron to resume oil production in Venezuela, delivery to US only

The Mayor of London, Sadiq Khan, will expand the Ultra Low Emission Zone (ULEZ) (earlier post) London-wide. The expansion will come into effect on 29 August 2023 and will operate across all London boroughs up to the existing Low Emission Zone boundary for large and heavy vehicles.

On 8 April 2019 the Mayor of London launched the ULEZ in central London. In October 2021, the zone was expanded up to, but not including, the North and South Circular Roads. The ULEZ is now 18 times the size of the original area and covers 4 million people—more than a third of London’s population. 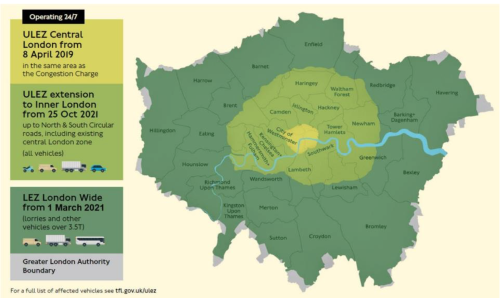 Vehicles must meet strict emission standards to drive in the ULEZ area:

The ULEZ has already helped to reduce roadside pollution levels by 44% in central London and 20% in inner London. Expanding ULEZ London-wide is projected to save 27,000 tonnes of CO2 in outer London, nearly double that which the central London ULEZ achieved in its first year of operation. Among other improvements, the expansion is forecast to make further progress to reduce air pollution, by reducing NOx emissions from cars and vans in outer London by 10% and 7% respectively, and reducing PM2.5 car exhaust emissions in outer London by nearly 16%, benefitting five million outer London residents. 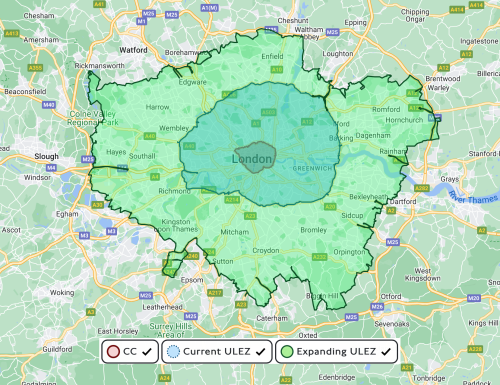 The expansion will be accompanied by a new £110-million (US$133-million) scrappage scheme to support Londoners on lower incomes, disabled Londoners, charities and small businesses and sole traders. Successful scrappage applicants will receive a grant to scrap or—for the first time—retrofit their vehicle for certain vans and minibuses. Successful car owners can opt to receive a smaller grant accompanied by up to two free annual bus and tram passes, which would give them a higher financial package.

This will mean that over a quarter of a million disabled Londoners could be eligible for the new exemption periods, including those who automatically qualify for a Blue Badge. The Mayor is providing further support through scrapping the fee for drivers to sign up to Auto-Pay for the ULEZ and Congestion Charge.

To maximize the potential benefits of expanding the ULEZ and strengthen alternatives to private cars, the Mayor also announced a plan for improving the bus network in outer London. Two new routes will be introduced in Sutton, with improved service to the new Cancer Hub at the Royal Marsden Hospital. In east London, new zero-emission cross-river services will be introduced, subject to consultation. This includes a new high-frequency, limited stop service between Grove Park and Canary Wharf, and an extension to route 129 (Lewisham – North Greenwich) north across the river to Great Eastern Quay via the Royal Docks.

New services and improvements, that will see more than one million further kilometers added to the bus network, are also planned to support growth areas in a number of other outer London location. This is part of the biggest ever expansion of the bus network in outer London.

The ULEZ is a very targeted scheme to get the most polluting vehicles off the road. Compliance within the current ULEZ area is now at 94%, much higher than the 39% when ULEZ was first announced in 2017, and also higher than 85% the month before previous expansion, and compliance in outer London is already around 85%. This means that most drivers in outer London will not be impacted by the expansion London-wide.

The evaluation survey of the Mayor’s Car and Motorcycle Scrappage Scheme shows it reduced vehicle ownership, with survey respondents also reporting a decrease in car travel and an increase in walking, cycling and public transport use. The report on the Mayor’s Scrappage Scheme shows that in addition to those who used the funds to purchase a ULEZ compliant vehicle, others used the money for greener transport options such as public transport, bikes and e-bikes and car clubs.

In order to support those who would like to use the money from the scrappage scheme for cleaner transport options, in addition to supporting those who want to put the funds towards public transport, bikes and e-bikes and car clubs, the Mayor’s new scrappage scheme will also include the option to get up to two annual bus and tram passes, and TfL is working with businesses to agree a range of offers on sustainable transport.

This is extremely bad timing. The British are heading into a recession with inflation at ~10%. The last thing they need is to be forced to buy new vehicles.
If they don't postpone or abandon it, it won't end well.
Maybe some UK types could confirm or deny this, as I am getting it from the internet.

There is never a 'good time' for such measures to improve public health.

However, car use in London is not remotely comparable to that in rural England, for instance, let alone in the US.

Car ownership is largely for the better off, and smarls up the roads whilst only getting minority of people to work etc, with most journeys easily able to be done otherwise.

For instance, one third of all car trips in London are less than 2km, and could easily be walked in a few minutes:

European cities, and especially large ones like London, need to leave the private car behind, it is a lousy way of moving people about, and the loss of the worst polluting ones is another benefit.

Here in Bristol, a far smaller city, there is also a clean air zone, which I would like to see expanded as rapidly as possible.

I expect considerable benefits in getting people out of their car, reducing average commute times for people in buses and on bicycles etc, and in cleaning the air.

These mandates can not come soon enough; For example; California has a mandate that after 2035, all cars sold in the state must be EVs. That figure is now only 16% of car sales are EVs...not good enough!

We are told that BEVs are fine as most people do less than 30 miles most days, so recharging is not a major issue.

In that case why is all the effort and subsidy going to big battery BEVs, when a plug in hybrid can do the job for most people, without inconvenience and using a fraction of the resources?

The resources demands of converting production to all BEVs are difficult to see how they will be covered in the time frame, not to mention that they are really for the comparatively wealthy, as they are still many thousands more than cheap cars, with rising materials prices due in part to the demand from building these monster batteries pushing prices up, not to the affordability for everyone which was the meme justifying subsidies for early wealthy adopters.

Not for the first time, Toyota have got it right, not the subsidy grubbing projectors selling a fake prospectus.

Eventually, sure, big battery BEVs may be a truly economic option, although the way to go could equally be replacing the combustion engine in a plug in hybrid with a fuel cell, so eliminating the the residual carbon emissions and pollutants.

"We are told that BEVs are fine as most people do less than 30 miles most days, so recharging is not a major issue."
If that statement is reliable, then why bother with hybrids at all? A smaller battery with a capacity of 60 - 100 miles would be more than sufficient in municipal areas. I certainly would not raise a sword for hybrids / ICEs.

I don't know if you are trying to comment on hybrids, plug in hybrids, or what.

I have no idea what argument you are trying to make.