Norway-based research organization SINTEF is currently heading a major EU-funded project called HARARE, which aims to use hydrogen to recover copper and aluminum from copper slag and bauxite residues (red muds), respectively. HARARE stands for “Hydrogen As the Reducing Agent in the REcovery of metals and minerals from metallurgical waste”.

In both the slag from flash smelting of copper and the bauxite residue from alumina production in the Bayer process, the main component is iron oxide. At the core of the HARARE concept is the use of hydrogen gas to reduce the iron oxide without process-related CO2 emissions.

There are three megatrends currently driving inevitable future increases in demand for metals: the transition to the use of renewable energy sources; the increased use of electric cars; and the development of smart cities.

Standard aluminum smelting processes generate about twice as much red mud waste as aluminum metal. Red mud is very basic and is commonly dumped in reservoirs that occupy large areas of land. As well as creating major land use problems, red mud also represents a potential source of pollution and a safety risk to areas in the vicinity of the reservoirs.

Left: In a traditional linear economy, only very minimal volumes of metallurgical waste are used for other applications. Most of the waste remains as such and is dumped in large landfill sites. Right: In a more circular system, all of the value in the waste is exploited. Dumping is minimised and in ideal situations is eliminated entirely. The aim of the HARARE project is to use hydrogen to recover rare minerals and metals from the waste streams of the aluminum and copper industries. Diagram courtesy of SINTEF

Similarly, every kilo of copper produced leaves 2.2 tonnes of slag. In the EU, as much as four megatonnes of copper slag is produced every year. Globally, the aluminum industry produces 160 tonnes of slag waste each year—equivalent to about 20 kilos per inhabitant. If production of these metals is now expected to increase, the problem of waste will only get worse. 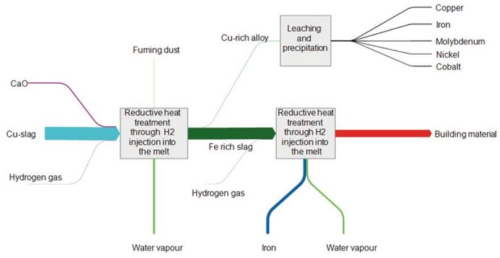 Sankey diagram for the valorization of copper slag. van der Eijk and Dalaker

In theory, metallurgical slags containing mineral and metal residues may represent a resource. However, one of the challenges is that these residues contain only low concentrations of the metals and minerals of interest. For example, it is possible to recover copper from copper slag that contains more than one percent of the metal. Slag that contains less than one percent copper will normally be regarded as waste and dumped.

Other rare and valuable metals and minerals occur in even smaller concentrations. The concentration, the nature of the mineral mixture and how these occur in the slag material will determine how difficult it is to recover the pure metals.

'Similarly, every kilo of copper produced leaves 2.2 tonnes of slag.' !!!
Difficult for the heavy use in electrification.

I have been wondering for a time why is the automotive industry so indifferent to the price of copper. They should be moving to aluminium conductors already.

I would imagine that it is a lot easier to substitute aluminum in construction where weight is not so critical than in transport where it is.

Wind turbines and their cables are also major users:

@Davemart,
for the same conductivity, aluminium is lighter than copper. Close to half the weight!
Problems with aluminium are:
- Half the weight, but the double the area. Aluminium conductors are thick. That's a con for i.e. electric motors.
- Connections; aluminium connections are considered to be more problematic than copper ones.

None of these problems are show stoppers, and I am pretty sure at some point aluminum will be widely used. The industry is conservative, but copper will remain expensive in the future.