Honda will produce an all-new hydrogen fuel cell electric vehicle (FCEV) based on the recently launched, all-new Honda CR-V starting in 2024 at its Performance Manufacturing Center (PMC) in Marysville, Ohio. This new zero-emissions vehicle will contribute to Honda’s previously announced goal to make battery electric vehicles (BEVs) and FCEVs represent 100% of its global auto sales by 2040. 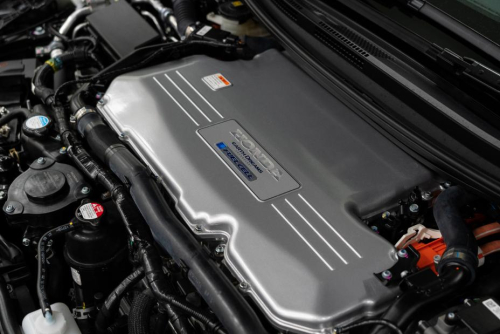 The new CR-V-based FCEV also will mark North America’s first production vehicle to combine a plug-in feature with FCEV technology in one model, which enables the driver to charge the onboard battery to deliver EV driving around town with the flexibility of fast hydrogen refueling for longer trips.

Honda established our goal to realize carbon neutrality by 2050 and the complete electrification of our vehicle lineup by 2040 is critical to achieving it. As we accelerate our plan to produce Honda battery EVs in the United States, we also will begin low volume production of fuel cell electric vehicles there to further explore their great potential as part of a sustainable transportation future.

The PMC was conceived as a small volume, specialty manufacturing facility, focused on craftsmanship and hand-assembled vehicles. Since opening in 2016, the PMC has been responsible for production of the Acura NSX supercar, multiple Acura PMC Edition vehicles (including TLX, RDX and MDX) along with Honda Performance Development race cars. This makes the PMC uniquely suited to production of high-quality FCEVs, which require special assembly procedures.

This approach echoes the broad role that Honda’s Tochigi, Japan plant played in manufacturing both the original NSX supercar starting in 1989 and, later, the Honda FCX Clarity FCEV in 2008.

As America’s best-selling CUV of the past quarter century, the Honda CR-V will provide an excellent foundation for a FCEV, adding zero emissions and EV performance characteristics to its fun-to-drive personality, sporty styling, and outstanding utility, while retaining generous passenger and cargo spaces.

The all-new 6th generation 2023 CR-V is already playing a key role in the Honda electrification strategy with CR-V hybrid-electric models positioned at the top of the lineup and expected to represent about 50% of annual CR-V sales.

More details about the all-new FCEV version of the CR-V will be announced closer to its introduction in 2024.

Shell seems to have a more realistic view on reality than Honda does.

The advantage of an BEV over the FCEV is electricity can be generated locally by the user and can make him independent of the fuel providers, in this case hydrogen instead of gasoline.

Lugging several hundred kilos of batteries around permanently sourced from currently difficult to produce in the required quantities materials is not the magic cure all some seem to imagine.

Many posters here seem entirely ignorant of the fact, or choose to ignore, that for the vast majority of the world's motorists there is no where at all to conveniently charge, nor is there a practical possibility of installing them economically.

A plug in hybrid means that you can use a plug when and where convenient, but the wheels will still go round just fine when you can't

"Lugging several hundred kilos of batteries around permanently ....."
Despite lugging those hundreds of battery kilos around, I've had absolutely no problems to reach all those destinations in the past decade that I had in mind.

- The Honda CRV Plug-in FCEV will probably use the i-MMD (Honda Clarity) battery that weighs over 300 kg.

- The Fuel Cell will have over 50 grams of Platinum Group Metals (roughly 2 ounces at over $1k/ounce) which is 40% of the Fuel Cell cost.

- Unless you live/drive only in California, there are few places to “charge” your Hydrogen tank.

- This CRV FCEV will be built at the PMC conceived as a small volume, specialty manufacturing facility, focused on craftsmanship and hand-assembled vehicles . The Hyundai NEXO and Toyota Mirai cost $65K so expect a similar or higher cost. BTW around the Tesla Model Y Long Range price.

-The Honda CRV PHEV with a 2l engine and AWD available is already in China, costs $42,000 and would be a much better option.

However, PHEVs have a clear route forward in fuel cells, with for instance usage of precious metals not set in stone, and nor are the numbers of hydrogen stations.

Together they provide a clear alternative to simply relying exclusively on stuffing in giant batteries, and also an alternative to the resource constraints of the postulated massive increase in BEVs, which remain hugely unaffordable for most.

ICE PHEVs are a better option for the moment, but they have a clear route forward in Fuel cells to supplement them

I think that Honda needs to take a more serious look at the success (or lack thereof) of the Toyota Mirai in the US market. Toyota has averaged 1500 sales of the Mirai annually. Also, when I tried to look up the value of a used Mirai, I found a 2019 Mirai being sold by a Toyota dealer for $20,488. But when you added up all of the extras that came with car including $15,000 worth of fuel, different warranties and road service, below market financing, I would but their real value of the car as less than $4000. This can not be much more than the salvage value given that the fuel cell contains precious metals. The real message is that this vehicle is an expensive pain to own.

The Toyota Mirai was designed as a low volume car to get the production expertise for fuel cells working.

Since it was not intended for mass production, labelling it a failure for not hitting targets which never existed makes no sense at all.

There are currently 107 hydrogen fueling stations in the United States.

This is a joke.

@ dursun:
Sorry to contradict you but its not a joke rather a "bad" joke.