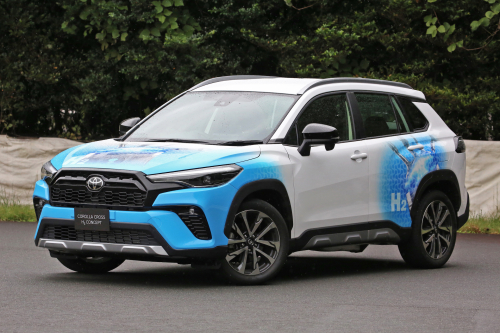 Real-world evaluation is currently being carried out alongside ongoing digital development, with the vehicle soon to begin winter testing in northern Japan. 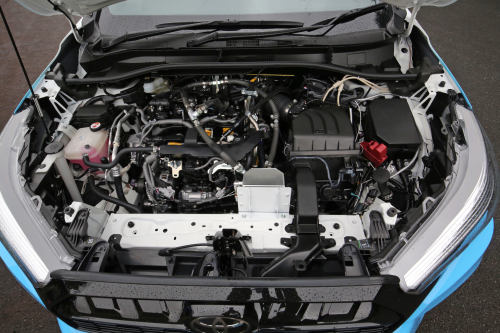 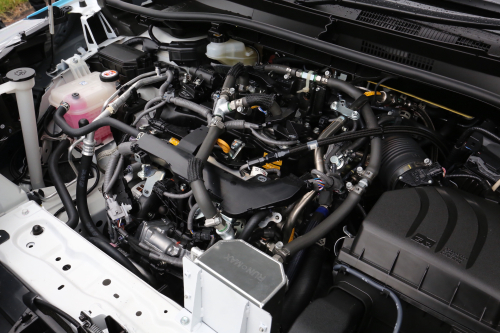 Toyota says it is now around 40% along the path to commercialization of products such as the Corolla Cross H2 Concept. It is not yet possible to say if the technology will reach maturity for road cars, but there is without doubt a clear opportunity in motorsports.

This year Toyota, through the Rookie Racing team, has participated in all Super Taikyu endurance races in Japan with the hydrogen combustion GR Corolla H2. (Earlier post.) During this time Toyota President Akio Toyoda, under his master-driver pseudonym ‘Morizo’, has taken the wheel in every race to evaluate and contribute to development.

Outside Japan, in August this year, a Toyota hydrogen-engine vehicle drove on European public roads for the first time when the GR Yaris H2 was put through its paces in a demonstration run at the WRC in Ypres, Belgium. (Earlier post.)

This regular and intense motorsports activity has helped to accelerate development activity and technical progress. Over the course of one Super Taikyu season Toyota has been able to increase hydrogen combustion power by 24% and torque by 33%, achieving the breakthrough of dynamic performance on par with a conventional gasoline engine.

Furthermore, range has been extended by around 30% and refueling time reduced from approximately five minutes to one and a half minutes. In addition to hydrogen usage, Toyota is working together with many stakeholders in the areas of green hydrogen production and transportation with the demanding environment of motorsports as a testbed.

Im interrested to buy in 8 years from now but i live in canada and they seam to be slow on the hydrogen infrastructure.

I wonder what the range is, they only say it was extended by 30%, but compared to what? Adding hydrogen tanks to a normal ICE platform is probably hard (small tank?), then you have efficiency of combustion of a racing 1.5 turbo engine. If this thing gets more than 200 km range, then kudos to Toyota.

It will be interesting to see how this all plays out. After driving Nissan Leafs for 12 years,I would find it difficult to go back to a combustion technology daily-use automobile. I see H2 as a necessary fuel for clean energy aircraft propulsion, either in a combustion engine or/and in fuel cells. Perhaps the knowledge Toyota gains from these combustion engine projects can be ported over to aircraft use.

Yet another WTF hydrogen project from dumb and dumber.

Burning hydrogen produces NOx. It is also almost impossible to prevent leaks of hydrogen, which when mixed with air can be explosive. Then there is all the energy loss from generating the hydrogen, compressing it, transporting it to the pumping station and then pumping it into the vehicle, and finally the losses in burning it.
Much better to put the electricity into a battery, then use it. Most of the electricity is already there, and we can produce it on site with solar and wind.

@ Gorr:
"----I live in Canada and they seem to be slow on the hydrogen infrastructure."
I'm convinced that the Canadian government has a far better perceptive of future technologies than you do. I can truly understand why they are "hesitant" to invest in BS-aspects. No one, including Canada, excluding of course all oil divested industries - has financial assets to burn just for fun.

Another empty press release while Toyota continues to fall further behind the transition to EVs.

' Burning hydrogen produces NOx. It is also almost impossible to prevent leaks of hydrogen, which when mixed with air can be explosive. '

Yeah, what do the likes of Cummins and Toyota, or Daimler and Volvo, know about building engines compared to you?

Do you actually read what you say, and seriously believe that they are all utterly incompetent?

It is not even worthwhile refuting in detail, as you post simple fantasy based on your preconceptions.

Through their range of technology, TMC continue to make steady progress in decarbonisation without excessive demand on difficult to ramp battery resources.

No doubt you as well as VW know way, way more than TMC about how to build cars, and how to successfully decarbonise, but unfortunately the evidence for either is non existent at the moment.

"No doubt you as well as VW know way, way more than TMC about how to build cars, and how to successfully decarbonise, but unfortunately the evidence for either is non existent at the moment."
Well, Dave you may not know how close to the truth you are at times but history does tend to repeat itself time and again.
Galileo almost ended on the stake because he insisted on the factual reality and knowledge which he had gained through logical and practical experience. But the church and pretty well the rest of humanity knew it all better because they believed.