The Department of the Interior announced results from the Bureau of Ocean Energy Management’s (BOEM’s) wind energy auction for five leases offshore California. (Earlier post.) The lease sale represents the third major offshore wind lease sale this year and the first ever for the Pacific region. The sale drew competitive high bids from 5 companies totaling $757.1 million, well exceeding the first lease sales that were held in the Atlantic. 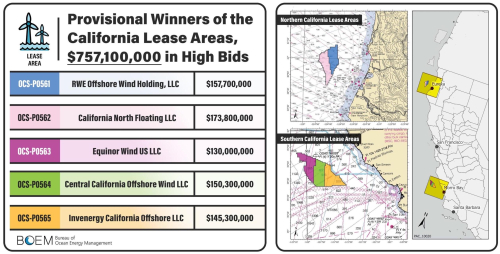 The lease sale included a 20% credit for bidders who committed to a monetary contribution to programs or initiatives that support workforce training programs for the floating offshore wind industry, the development of a US domestic supply chain for the floating offshore wind energy industry, or both. This credit will result in more than $117 million in investments for these critical programs or initiatives.

The auction also included 5% credits for bidders who committed to entering community benefit agreements (CBAs). The first type of agreement is a Lease Area Use CBA with communities, stakeholder groups, or Tribal entities whose use of the lease areas or use of the resources harvested from the lease areas is expected to be impacted by offshore wind development. The second type of agreement is a General CBA with communities, Tribes, or stakeholder groups that are expected to be affected by the potential impacts on the marine, coastal or human environment from lease development.

Under stipulations in the leases, lessees are required to engage with Tribes, ocean users, and local communities that may be affected by their lease activities. Lessee engagement must allow for early and active information sharing, focused discussion of potential issues, and collaborative identification of solutions. These communication and engagement activities must be routinely reported to BOEM.

' The leased areas have the potential to produce more than 4.6 gigawatts of offshore wind energy, enough to power more than 1.5 million homes. '

Wow! A rating of power provided which actually takes account of capacity factors, instead of using peak as though it were continuous!

We'll assume optimistically that the contract bidding / tendering process was 100% ethically clean unlike so many engineering and construction projects worldwide - free from bribery, back-handers, kickbacks etc. Independent credible oversight was provided by which authority?

Yep, everyone involved should be proven to be living saints, and the underlying technology dismissed out of hand if that it not the case.

What are you on about?

With HVDC needed to transport this power long distances, why not put 2-axis floating solar lily pads on Lake Mead and Powell? Inclination could be water hydraulic or pneumatic to maximize safety and economics. They could also save some water by preventing evaporation.