Ongoing research between IonQ and Hyundai has the two companies applying quantum machine learning to image processing, where images—such as road signs—are encoded into a quantum state for classification and object detection. The initial success of these early projects has led Hyundai to pursue additional joint research with IonQ on a number of new techniques.

Of particular interest in this new endeavor is the analysis of spatial and environmental data from lidar and other sensors, which could improve vehicles’ understanding of the nature and location of objects, people, and environment around them. Quantum machine learning techniques being investigated at IonQ have shown the potential to learn faster, be more effective in recognizing edge cases, generalize better, learn from lower resolution or noisy data, and capture complex correlations with a far lower number of parameters. These deep technical advantages can ultimately lead to quicker, safer and more accurate decisions without user input. 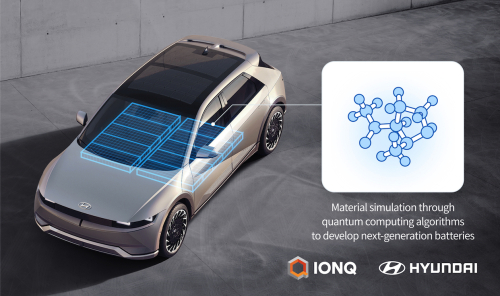 At the Q2B conference in Santa Clara, IonQ is presenting results from its advanced battery chemistry model project with Hyundai (Zhao et al.). The results showcase the advantages of quantum computing in studying lithium compounds involved in next-generation electric vehicle battery chemical reactions, and how quantum computing is an effective tool for chemistry simulation.

The new Hyundai projects closely follow IonQ’s recent announcement that it secured a $13.4-million contract to supply the US Air Force Research Lab (AFRL) with access to its trapped ion systems for quantum computing hardware research and for the development of quantum algorithms and applications.

Other commercial partnerships to have materialized in recent months include Airbus, GE Research, and Goldman Sachs, among others. Additionally, IonQ’s Aria system is the most powerful commercially available quantum system in the market with an industry-leading 25 algorithmic qubits.