Electreon, a developer of wireless and in-road wireless electric vehicle (EV) charging technology for commercial and passenger EVs, will be deploying its technology in the first-ever public wireless road project in Germany. This project will power a public electric bus.

In collaboration with EnBW, a provider of charging infrastructure for electric vehicles in Germany, Electreon will be deploying 1 km of Electric Road System (ERS) along a stretch of road, as well as two static charging stations. The two locations are determined based on the bus route and where the bus stops during its operational schedule. 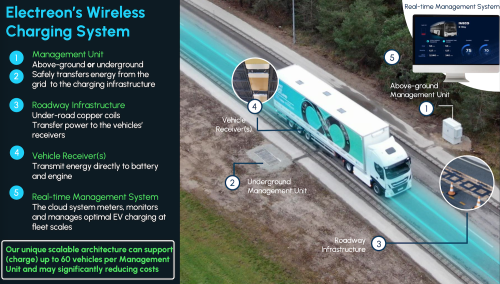 The inductive charging technology involves copper coils being embedded in the road surface. As soon as the vehicle drives over the coils, the receiver coils fitted on the underbody are activated and draw the electrical energy into the vehicle’s battery via a magnetic field. This enables the vehicle to cover long distances without the need to stand idle while being recharged—especially advantageous for heavy goods vehicles. 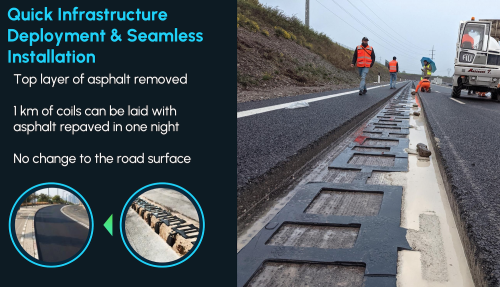 The technology will be deployed in the city of Balingen in two phases. In the first phase, a 400-meter-long route with two static charging stations will be deployed. In the second phase, the electric road will be expanded by another 600 meters. The project will charge an electric bus, en route to the city.

This project follows a successful pilot of Electreon’s technology in the city of Karlsruhe, in partnership with EnBW. An electrified road was installed at the EnBW training center, powering a local public bus at peak hours. As part of the agreement for this latest project in Balingen, Electreon will receive up to €3.2 million to deploy the dynamic and static wireless charging infrastructure.

The project in Balingen shows how innovatively and consistently we are promoting e-mobility in Germany. We have a holistic approach and want to make wireless charging technically fit for German public transport. This also includes convincing authorities, energy network operators, bus operators, and the general public of the opportunities. As a leading provider and innovation driver in the field of charging infrastructure, we are pleased to be part of this promising project with partners such as Electreon, and the Karlsruhe Institute of Technology.

The aim of this project is not only to open up wireless charging to the public in Germany. Other significant aspects include the development and use of a tool that will assist public transportation planners in where to install the inductive infrastructure for a specific town or region. We have already shown in our joint Karlsruhe project with EnBW how effective, safe, and easy to deploy wireless dynamic charging is. We hope this is the start of many more projects on public and private roads in Germany.

This is the type of technology I like to see developed.
I have a lot of questions, though...
Can the induction magnetic field heat (unwanted) metallic parts of the car?
Does the magnetic field reach the passengers?

It looks to me as though adequate safety regulations are in place, as their site says they reach all relevant criteria.
I can't remember the details now, but a few years back I had a considerable discussion with an executive at Witricity, I think it was, who in my view adequately demonstrated that a compliant system is safe.

What I am more concerned about is efficiency, but testing here seems to indicate 91%;

It is always interesting to dig out the info on: '91% of what?' as one frequently finds in such things that it only refers to part of the system, not all of its, so that in this case the road to vehicle efficiency may be 91%, but what about the charging of the road etc?
I would like to see a far more detailed breakdown.

But I am certainly way keener on this than the whole notion for heavy transport of simply sticking in huge expensive resource gobbling batteries, and charging them with even more vast batteries.

In the not all too distant future, batteries (e. g. solid state) will decrease in volume and mass whilst increasing in safety and energy density thus subsequently increasing achievable range. As far as BEV-POVs are concerned this innovation applies far less to them but more so perhaps to heavy and long distance transports.

I wonder how the cost/mile compares to Musk's Hyperloop