Review of co-processing of biocrudes in oil refineries

Liquid intermediates from pyrolysis and hydrothermal liquefaction (HTL) can be co-processed in an oil refinery along with conventional crude oil. In an open-access paper in the journal Energy & Fuels, a team from VTT Technical Research Center of Finland, with colleagues from Pacific Northwest National Laboratory (PNNL) and Ghent University, provides an overview of co-processing options for such bio-liquids.

Fast pyrolysis and hydrothermal liquefaction (HTL) are both processes for producing liquid fuels from dry/solid or wet biomass.

One attractive option for upgrading the liquid intermediates from pyrolysis and HTL is to co-process them in an oil refinery. This concept was first suggested by VEBA OEL (now part of BP) in 1995, but at that time, it was not seen as competitive compared to other biomass alternatives as well as in comparison to crude oil. The advantage of this approach is the use of decentralized pyrolysis and HTL plants, which can be located near the biomass production site. Only the biocrude is transported to a centralized refinery, which reduces transportation costs as a result of the increase of the volumetric energy of the oil compared to the original biomass.

Inserting of the upgraded biocrude with the petroleum fuels as finished fuels represents the lowest risk for the refinery, while inserting it at the pre-distillation phase poses the highest risk. The greatest benefit for the refinery is achieved if the biocrude is introduced in some of the processing units after mild upgrading. Both cracking and the capability to remove oxygen from the biocrude is required from these processing units, and therefore, co-processing could potentially take place in the fluid catalytic cracker, hydrotreater, or hydrocracker. 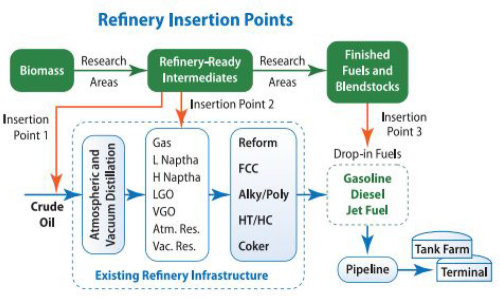 Co-processing could potentially take place in the fluid catalytic cracker (FCC), hydrotreater, or hydrocracker. In the FCC unit, the catalyst is continuously burned in a regenerator, and therefore, FCC units are more tolerant to the oxygenates in the biocrudes, the authors note.

Co-processing has so far been tested mostly with FPBO; the first short-term test to commercialize the technology has been carried out in Preem’s refinery in Sweden. Introducing less than 10 wt % bio-oil or HTL biocrude in the FCC is still possible without having a significant increase in the coke yield and reduction in the gasoline yield.

The renewable carbon efficiency measured for the 10 wt % bio-oil feeding has been close to 30 wt %.

The research on co-hydrotreatment and hydrocracking is quite limited. During co-hydrotreating of stabilized biocrude with fossil fuel, a competition between HDS and HDO reactions was observed, which resulted in a higher sulfur content in the final product. Co-hydrotreatment of vegetable oils with biocrudes might therefore be a better option to extend this fuel to contain also lignocellulosic feedstocks. Co-hydrocracking may be used as a second step in upgrading of biofuels if molecular weight reduction is still needed.