StoreDot, a developer of extreme fast charging high energy batteries for electric vehicles, announced that its XFC batteries and systems are now being tested by more than 15 global automotive brand manufacturers, and that it has additional potential manufacturing partnerships in the pipeline for this year. 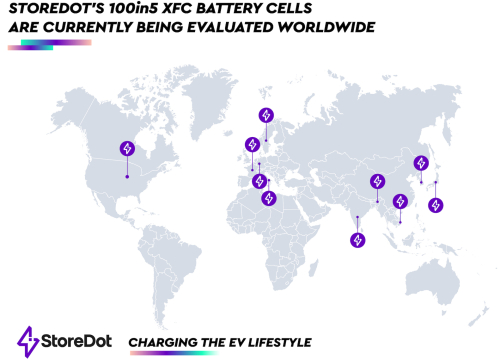 Last year StoreDot revealed its ‘100inX’ strategic technology roadmap. This featured 100in5, 100in3 and 100in2 of miles per minute of charging—three generations of StoreDot technologies of silicon-dominant XFC, semi solid state and post-lithium architecture. The roadmap reaffirms that the timings for these will be delivered over the coming decade with 100in5 by 2024, 100in3 by 2028 and 100in2 by 2032.

The company now has a growing network of strategic global partnerships and investors, spanning the entire battery ecosystem. To date it has received investments from global automotive manufacturers including Daimler, Ola Electric, Polestar, VinFast and Volvo Cars.

So we get battery that will accept a charge super fast, like filling a gas tank for an ICE car.

But we already have problems with enough fast chargers for the BEVs that exist, and grid infrastructure can barely keep up with current chargers. Some locations are installing storage to help, but we are already projecting shortages in battery capacity for the legislated BEV requirements. Where is the additional storage capacity coming from?

In saying 100 miles in 5 minutes also implies we also need much higher charge rates from the charger now that the battery can accept it. So now the prior mentioned short comings in charging infrastructure are going to further stressed if manufacturers switch to this, and more importantly, when consumers expect the convenience of 5 minute fill ups daily. People are too used to how ICE cares work. I work in car business and that's what people are want.

This is an important step in improving the performance of BEV, but it is only one tool in the tool box. Without the rest of the tools and a lot of education, this has the potential to do as much harm as good on public perception of BEV short comings.

An aspect that should be regulated by law is that fast charging be allowed only in combination with a respective battery buffer sized to accommodate expected traffic . Irrelevant if the charger has public access or if it's located in someones garage. Such a measure would remove any potential and unnecessary strain on the grid.

@yothman:
How about fast chargers with battery storage and solar panels? that should help solve the concern with grid overload.
BTW, I've gone 12 years now without charging thru my DC port...haven't gone beyond the roundtrip range of the car. And, I think that's mostly the case with those who live in single family homes. Apartments are a separate matter.
I have faith that as battery tech advances so also will the flexibility of BEVs. Enough so the 300-400 mile range BEVs will someday be a defacto standard and fast charging will only be needed on the longest of distance trips.

@ Lad:
"How about fast chargers with battery storage and solar panels? that should help solve the concern with grid overload."
I've never encountered the "dilemma" for the necessity of fast charging. My wallbox is designed to handle 20 kW but is limited to 11 kW due to the charger located in the vehicle. The charger in the BEV is - so to say - the weakest link within the "charging chain". Charging time from 10 - 80% in my case is limited to ca. 3 hrs.; I have absolutely no problem with that.
My seasonal battery buffer is also adequate for fast charging but I really do not need it for such purpose.