In June 2022, Stellantis made a €50-million equity investment in Vulcan and extended their original binding lithium hydroxide offtake agreement (earlier post) to 2035. With the resultant 8% shareholding, Stellantis is the second-largest shareholder in Vulcan.

In the northern area of the Upper Rhine Valley in Rüsselsheim am Main, Stellantis maintains a large manufacturing facility in which the DS 4 and Opel Astra models are produced, including the electrified variants. This facility in the German state of Hesse is also the traditional home of the Opel brand and the German headquarters of Stellantis. 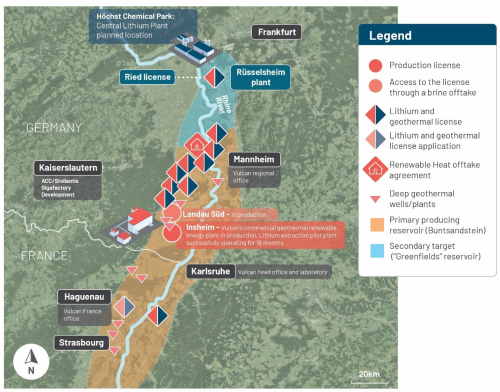 The planned project will be at the northernmost extent of Vulcan’s focus area in the Upper Rhine Valley.

The first phase of the project will include a Pre-Feasibility Study for the construction of geothermal assets for Stellantis’ Rüsselsheim facility, carried out by Vulcan and based on existing data. The following phase, if the first phase is successful, will focus on drilling and more advanced studies and development.

Stellantis will aim to source funding for 50% of the project development after the first phase.