Six public charging locations with ultra-fast 300kW charge points aimed at E-Trucks have been launched along a 600km stretch of the Rhine-Alpine corridor across Germany. The corridor is one of the busiest road freight routes in Europe connecting key North Sea ports in Belgium and the Netherlands with the Mediterranean port of Genoa in Italy connecting through a network of roads stretching in total 1,300km. 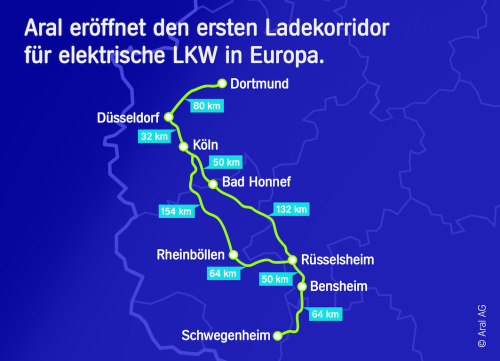 Once complete, using the Aral pulse charging corridor, an E-Truck will be able to cover more than 600km across Germany along one of European’s major road transport routes.

The 300kW charging stations are each capable of charging more than 20 E-Trucks per charger each day. An E-Truck’s range can reach up to 200km in around 45-minutes using the ultra-fast charge points.

Estimates suggest that approximately 270,000 battery electric medium- and heavy-duty vehicles will be in operation in Europe by 2030 and that they will require up to 140,000 public and destination electric charging points.

In addition to developing new dedicated electric charging sites, bp also aims to create a network of mobility hubs along key logistics corridors across Europe providing freight operators with a range of energy options, including traditional fuels to support our fleet customers at every stage of their decarbonisation journey.

bp has a global ambition of having more than 100,000 chargers installed worldwide by 2030 focused on ultra-fast charging.

It strikes me that what you want is a Euro* wide specification for road catenaries so you can charge on the go. This would be backed up with some amount of battery storage in the cab, so you can have regions with no catenaries, like cities and interchanges.
Obviously, it is tricky, (you need two wires near each other, you need to keep it safe, etc). but the benefits are considerable if you can charge while you drive.
(*Or world wide)

I should say, charge large vehicles, like trucks and buses. Cars would not be tall enough and EVs seem to be doing pretty well as things stand.