Hitachi Astemo, Trend Micro and its subsidiary VicOne have expanded their collaboration to provide security solutions for connected cars, aiming for commercialization by 2025. 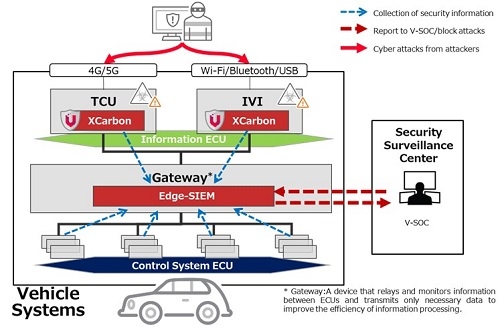 xCarbon protects information-related ECUs from cyber attacks, including devices that communicate over the Internet TCU installed in vehicles and information systems (IVI) with embedded high-performance OS such as car navigation systems. xCarbon detects and blocks, in real time, attacks that exploit vulnerabilities, communications with command and control (C&C) servers that are remotely controlled by cyber attackers, communications used by malware, and unauthorized file rewriting.

By placing Edge-SIEM in the central gateway, which is responsible for the central communication control of the vehicle network, log information such as gas and brake pedal operation and car navigation system manipulation is collected from each control ECU and information ECU to monitor the behavior of the entire vehicle system.

Edge-SIEM monitors and determines suspicious behavior in the vehicle, including braking and accelerating, and immediately notifies V-SOC, the automaker’s security monitoring center, if there is a possibility of a cyber attack. At this time, xCarbon functions as a security sensor for Edge-SIEM and provides the security logs of information ECUs such as TCU and IVI to Edge-SIEM. By collecting information, making decisions, and notifying in the vehicle, xCarbon reduces the monitoring burden on the V-SOC, blocks attacks in real time, and supports early response to cyber-attacks.

In August 2022, a verification experiment was conducted using Hitachi Astemo’s central gateway equipped with Edge-SIEM and a pseudo-IVI equipped with xCarbon in an environment simulating an actual vehicle. In the experimental environment, cyber attacks that attempted to steal a vehicle by exploiting a vulnerability in the IVI, entering the vehicle network, and use of unauthorized commands was detected by xCarbon at the intrusion stage and transmitted to Edge-SIEM. The solution was confirmed to be effective in preventing the attack by blocking the transmission of unauthorized commands from the IVI. The three companies aim to commercialize the solution for connected car by 2025.