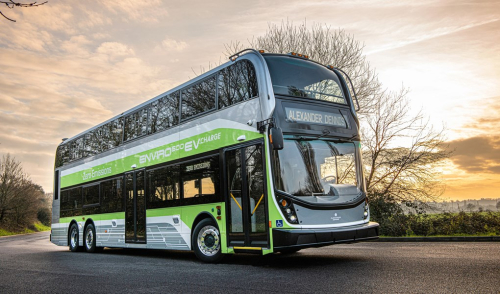 An electric portal axle with hub motors provides fast and efficient propulsion for the Enviro500EV CHARGE with 2×125kW peak power output. The drive and auxiliary axles have been switched with power supplied at the third axle, ensuring optimum weight distribution and high passenger capacity.

A class-leading 648 kWh of energy storage is provided by batteries that are integrated in the chassis and the rear of the vehicle for a low center of gravity and great stability. These are fed through industry standard CCS1 charging points available on the left or the right side of the bus. Gantry charging is an option.

The system includes an electric heat pump to provide both heating and cooling, which minimizes the amount of energy required and increases range capability of the fully air-conditioned Enviro500EV CHARGE. A stylish new dashboard features an economy gauge and halo color to immediately give drivers prominent feedback on how economically they are operating the bus.

Like all NFI double deck buses for North America, the 45-foot Enviro500EV CHARGE offers panoramic views, low-floor entry, reclined seating, overhead reading lights and air vents, USB ports, and Wi-Fi and multimedia capability. Its main feature is its high passenger capacity, with up to 82 seats, including 53 on the upper deck.

It also features several industry firsts, including full independent front suspension for a smoother and more comfortable ride, and an integrated electric drive system tailored to the requirements of North American transit agencies.